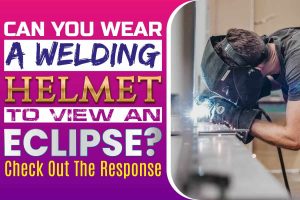 We always differentiate day and night because of light. However, there are periods when it can be dark during the day.

An eclipse happens when a celestial body moves in front of another or between two other celestial bodies, casting its shadow on the planet.

An eclipse is an epoch event, and everyone wants to view it. However, NASA warns against viewing an eclipse with your naked as it can damage your eyes.

Can you wear a welding helmet to view an eclipse?

However, ensure that your helmet meets NASA requirements. NASA recommends that your gear should have a minimum shade value of 12. Using any glasses with a shade value less than 12 could damage your eyes.

Generally, shade 13 glasses are best for viewing an eclipse, but shade 12 is safe enough. Shade 14 glasses are too dim and they will not give you the best viewing experience.

What are the different types of eclipses? Continue reading to know more.

There are two types of eclipses – the solar and the lunar eclipse.

1. Solar Eclipse (Eclipse of the Sun)

A solar eclipse appears when the moon orbits between the sun and the earth, blocking the sun from the earth.

As the moon circles the earth, it comes to a point when it orbits between the earth and the sun, casting a big shadow on the earth.

Partial solar eclipse: This type of eclipse happens when there is a partial alignment between the sun, the moon, and the earth. The moon does not completely shield the sun in this case.

The partial eclipse of the sun occurs more often than types of the solar eclipse. You may not notice it as the moon’s penumbra causes it.

This outer shadow is light and covers only a part of the sun. When compared to the intense ray of the sun, things on earth may seem normal.

However, if you view the sky at the time predicted using NASA recommended glasses or a shade 13 helmet, you will spot the eclipse in all its beauty.

The moon blocks the sun entirely, and it keeps the earth dark for as long as it lasts. The total solar eclipse can last for a few minutes before the moon gradually moves over the sun.

A total eclipse is rare, and you can only experience it if you are in the thick part of the moon’s shadow – also called the umbra.

Annular solar eclipse: This type of eclipse occurs when the moon orbits at apogee or farthest away from the earth.

At this position, the moon looks smaller and does not completely cover the sun. It leaves a ray of sunlight around the sun, making it look like a ring.

2. Lunar Eclipse (Eclipse of the Moon)

A small part of the moon darkens, and it gradually moves around the corner of the moon till a full moon is restored.

Total lunar eclipse causes a complete darkening of the moon. The sunray reflecting on the earth penetrates the earth and reaches the moon slightly, causing the moon to have a red or orange color. We refer to this phenomenon as the blood moon.

Things To Note About A Solar Eclipse

During a solar eclipse, the moon gives out two kinds of light, the umbra, and the penumbra. The umbra is the darkest section of the moon as it blocks the sun.

The penumbra is the lighter shade that the moon gives as it covers the sun. This shade increases as it hits the earth, causing a partial, almost non-noticeable solar eclipse on a larger part of the earth.

As the moon circles the earth, it does not travel in a perfect circle. It bends at a point, forming an ellipse shape.

When the moon orbits far from the earth, we refer to it as apogee. When it orbits closest to the earth, it is called perigee.

The lunar eclipse is the most common type of eclipse. More people can view the lunar eclipse as it covers a larger portion of the earth. It occurs 2 to 4 times a year somewhere on earth.

Devices That You Can Use To View The Eclipse

There are devices that you can use to view an eclipse safely. The most popular one is an ISO-compliant solar filter/solar eclipse glasses.

You can also use a welding helmet of at least 12 to 13 shade values. You can also view an eclipse through a pinhole projector.

To do this, cut a smooth, clean circle hole out of cardboard or paper. Hold this above your shoulder while backing the sun.

Hold out another piece of paper behind the other one, and you will see the reflection of the sun. To make the sun look bigger, keep both papers far apart.

Caution While Viewing An Eclipse

Some Interesting Facts About An Eclipse

Because everywhere is dark, spiders pack up their webs, bats come out of their caves, and they think it is night. When it passes, roosters begin to sing, thinking a new day has dawned.

An eclipse appears when a celestial body moves in front of another or between two other celestial bodies, casting its shadow on the planet.

An eclipse is an epoch event that everyone wants to view. However, NASA warns against viewing an eclipse with your naked as it can damage your eyes.

You can view the eclipse with a welding helmet with a minimum shade value of 12. You can also view it with an ISO-compliant solar filter/solar eclipse glasses. Another way to view an eclipse is through a pinhole projector. 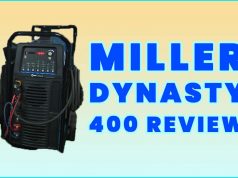 Miller Dynasty 400 Review. Is It The Best TIG Welder? David Huner
Welders are typically expensive, so you need to be keen when choosing one so you end up with a product that will work well...

Miller Dynasty 400 Review. Is It The Best TIG Welder?

Welding Magazine is a blog that provides you tips and tricks to be an expert on welding. The main purpose is to give you the best ideas an tips. So keep reading and stay updated.
It is also participant on Amazon LLC Associate Program that means, it will get little commission for making each successful sells.
© 2022 All right reserved byWelding Magazine